Having the feels about statue vandalism

***To clarify, I'm not advocating anything, just making a historical observation. I don't think it's my place to have an opinion. I'm not the one having my life consistently threatened by institutionalized racism. This is also not about violence or looting. It's specifically about the role of statue vandalism in history.*** 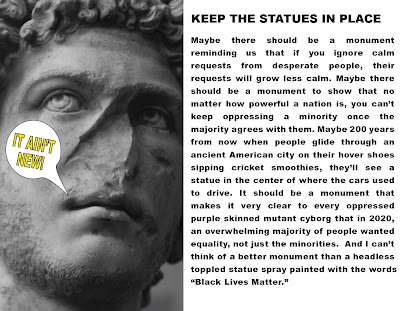 You can go back thousands of years and there’s one thing that has been consistent throughout. We always vandalize the statues. Its a ritualistic right of passage. When outsiders come in and take over, they remove or deface the statues of the previous leader. I’m not going to look it up right this second, but I wonder if it’s where the word “deface” comes from. The noses didn’t fall off of all those greek and roman statues because they were old. Stone is forever. The noses were smashed off deliberately. Even the Sphinx lost it’s nose to angry mobs (multiple times, actually).

Those giant stone temple ruins are also a result of war. They wouldn’t have fallen over in a million years. They were bombed. And people left them there because it felt too disrespectful to clear out the remains. Half a parthenon is better than a jamba juice. Removing the remains risks the mistake of forgetting.

Why not just remove the statue? They did that too sometimes. When trying to hide the past (commonly religious symbols), a statue would be pulverized. But when the statues remained in place with damage, it was to post a reminder that “this failed” or “this is what we overcame”. GRAFFITI WAS INVOLVED! It has long since washed off. But trust me, the noseless pieces in the museums once had latin or greek hashtags on them.

In many cases, a peaceful high functioning culture was invaded by greed and in other cases, the people rose up against their own leaders. So to say that defacing statues is historical is objective. You can agree with this assessment no matter which side you’re on. Rome is not denying that Visigoths broke their stuff and neither are the Visigoths.

Quick sidestep. A month after 9/11, I saw the wreckage up close. I remember being struck by how much it looked like classical ruins. There was a large piece of skyscraper with it’s column-esque vertical lines reaching up several floors at an arbitrary angle. When they talked about what to do with the location, I had hoped that they would make a park around the stabilized structure. I wanted America to have ruins. Not to celebrate the attack, but to put it in perspective. It’s almost like a weird coming of age or something. We are the new Rome. We rely on imperial expansion and if we run out of places to devour, we will crumble under our own weight. In 2001, Rome was sacked, just like it is every few hundred years. Here we are in 2020 and many young adults don’t have an emotional memory of that day, nor can they look at the ruins in a park and feel what it means to have the responsibility of an empire.

I’m not saying I’m right about a 9/11 park. Maybe its a stupid idea. But that was my feeling about it.

‘Nuther side step. Can we talk about Graffiti for a sec? We tend to see it as vandalism, ugly, low brow. As an artist, I never got into it. But after learning it’s history, it makes sense. A marginalized class of people were prevented from owning property and businesses. They also didn’t have municipal armed forces protecting their side of the tracks. So they did it themselves. Gangs patrolled their own neighborhoods and they branded their territory with spray paint. Don’t judge. European and Asian gangs did the same thing. Inevitably, it became an art form. Sometimes it looks too simple to be considered art. Consult your nearest graphic designer about simplicity and branding. Also, tell me NIKE’s logo is hard to draw.

When something is outside our own understanding of beauty, its easy to overlook. Remember how overlooked black ballerinas were? Well those days are over. That was the most beautiful photo I’ve ever seen. But enough about graffiti for now.

So what do we do about our American statues? After losing a war for their right to own slaves, they put up statues of the men that lead the fight. To some people, it had nothing to do with slavery and had everything to do with states rights etc. And that remains the argument to keep them in place. I’m not going to get into that other than to say, we once built statues to honor people who stood up to their government. Fine. Descent is honorable. Rebelion is sometimes necessary. Is that what they stand for? Among other things, sure.

I remember when performing at Gathering Of The Vibes, I was on stage looking over the crowd at a Columbus statue. The festy crowd is almost always 95% white. Why? Because the cops would never allow 20,000 people committing misdemeanors all at once in a public park if we weren’t a bunch of well-to-do white kids. But that’s a different convo. Meanwhile, the only Latino couple in the whole place was getting their backpacks searched by the cops. This distracted me on stage for about 3 songs and then they clearly didn’t find anything. The cop stayed in that spot. The Latino couple left our set early (Maybe it was my singing). Me being the nerd that I am couldn’t help noticing the irony of this happening on the steps of a Columbus statue. The cop and myself descended from immigrant colonists to this side of the ocean. The couple being searched was not. I’d love to think that was a coincidence or that the couple was doing something more sketchy than the thousands of white people, but this isn’t the only time I’ve seen it by a long shot. It’s just the only time I saw it happen literally in the shadow of a Columbus statue.

if you already agree that these statues are disrespectful, you can skip down until you see this *** ( ‘} ***

But we’ve grown up a bit since then. These statues watch over black and white and brown and gay and strait and christian and muslum and weird and normal and cops and homeless people as they pass by. No one looks at those statues and sees “yea! States rights” Just like no one looks at a swastika and sees “rebuild after WWI”. They look at these statues and see “Just because we lost the war doesn’t mean we changed our mind”. And the fact that it’s city property means that it’s the city who feels this way. The government, the cops, the judges. They all still honor this guy who tried to keep chains on the black family that live on that street.

Do those government officials not feel that way? Is this a misconception? I would have believed that if after we hadn’t lawfully and peacefully petitioned for years to have the statues moved to a museum, and if that hadn’t been ignored. But they didn’t. Their argument is “well, it’s our history”. So I can understand black folks saying “No shit, it’s our history too”. I’ve heard the argument that “how will we remember our history if we remove our sculptures and our confederate flag” etc. Just a reminder, there are no nazi related sculptures or signs in Germany and there is no one there who doesn’t know what happened. We built a new skyscraper, yet we #neverforget. But lets put a pin in this one for a sec.

These statues absolutely DO remind us of something. They remind us that an overwhelming portion of their culture doesn’t give a rats ass that you don’t feel safe in your own country. And in a time when white supremacy is coming back out of the closet and literally terrorizing us, a mayor or governor can’t simply say “we don’t need this statue anymore” because they’re afraid of hurting white people’s feelings and losing votes. THAT is what a majority of us see when we look at those statues.

I get it. We grow up thinking that Columbus was a great man that invented the Western Hemisphere (on purpose). We didn’t learn in school that he raped, murdered, and enslaved the people who had been cultivating this continent. I’ve been to Santo Domigo where he first set up shop. The buildings are still there. The statues of people who wiped out the original population and replaced them with imported slaves stand right there in the park, surrounded by the grandchildren of slaves. It’s not a misinterpretation. The plaque says “suppressed the natives”. That’s a worst case scenario. In America, its simply lack of education that we see Columbus as a hero. It’s not totally our fault that we got a white washed version in school. And it’s ok to change our minds.

By not changing our mind, we tell our own brown population that we still think we “discovered” this continent. Or at the very least, it was our supremacy that allowed us to dominate it (not small pox). And if someone can get elected president simply by saying “I’m going to build a wall to keep brown people out of OUR country", then it’s a clear message that at least a portion of the country feels a sense of supremacy. And at the very least, just like the confederate statues, if we ignore the fact that a Columbus statue still stands then we are saying “this is white land”.

What do I have to lose as a white person? It was a pretty statue? I don’t want to forget my history? It scares me that a group of people can outnumber the police? Those things are true with or without a Robert E Lee or a Columbus statue. Maybe I could say “can’t you just petition it to come down? Does it have to be so messy and illegal?” The answer is no. It has been petitioned several times for years. Just a fraction of that many signatures would remove a rusty car from a driveway and yet no one wants to talk about the statues.

So after years of people saying “our lives matter. Please stop treating us like animals” and our response has been “don’t be silly, all lives matter”, after years of petitions and peaceful protests, after years of the problem getting worse instead of better, this is what happens. People throw down and stuff gets broken. Are we going to forget that this happened? Should we completely ignore the counter argument of “how will we remember our history”? Will it happen all over again in 80 years? Should we leave the shop windows broken? Maybe a torched cruiser on the intersection? That would do the trick, but it’s already so misunderstood and polarizing.

Maybe there should be a monument reminding us that if you ignore calm requests from desperate people, their requests will get less calm. Maybe there should be a monument to show that no matter how powerful riot police are, you can’t keep oppressing a minority once the majority agrees with them. Maybe 200 years from now when people glide through an ancient American city on their hover shoes sipping cricket smoothies, they’ll see a statue in the center of where the cars used to drive. It should be a monument that makes it very clear to every oppressed purple skin mutant cyborg that in 2020, an overwhelming majority of people wanted equality, not just the minorities.  And I can’t think of a better monument than a headless statue spray painted with the words Black Lives Matter.

Posted by scribblesofdave at 10:00 AM